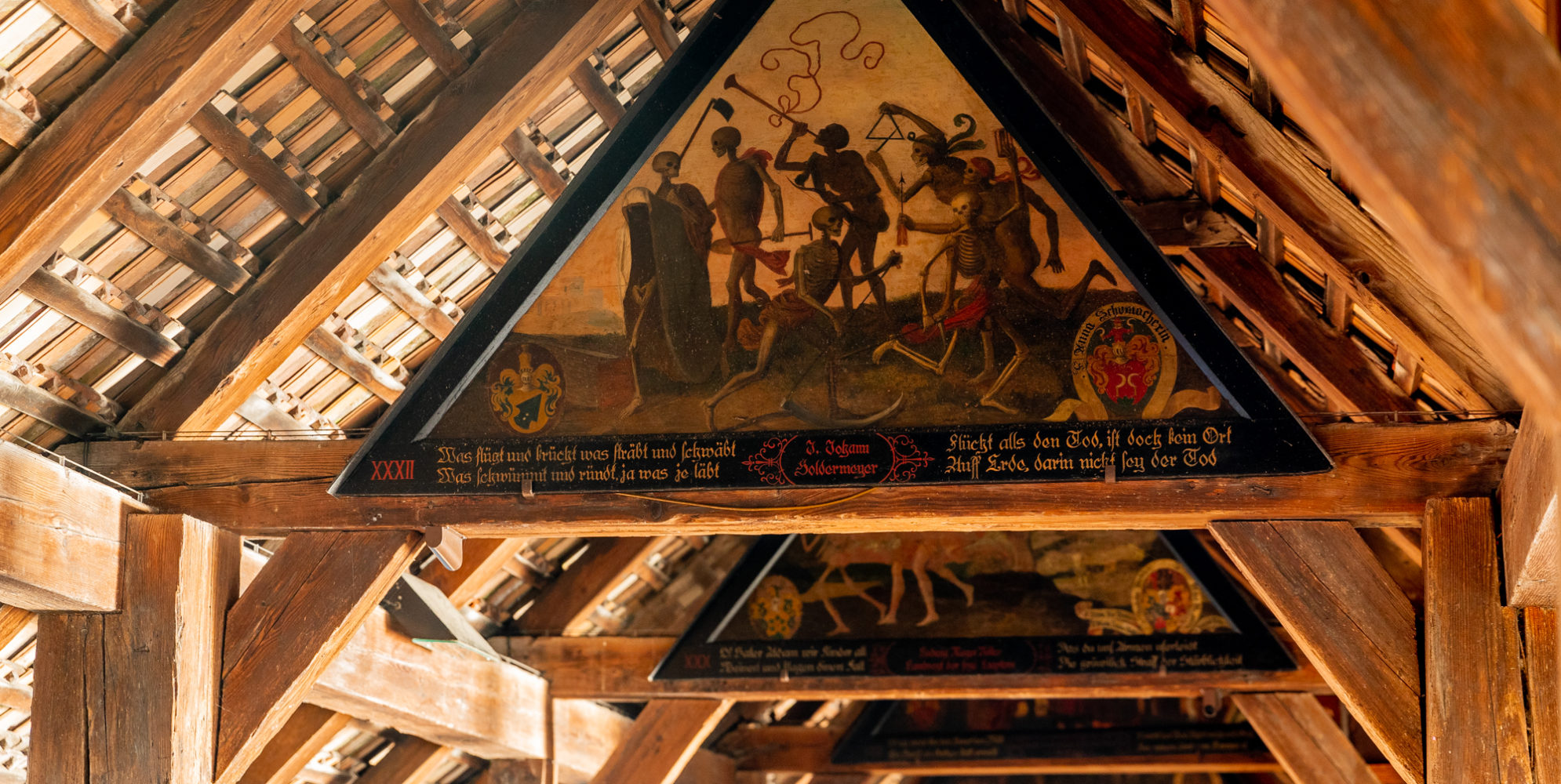 The Chaff Bridge’s cycle of paintings

Dancing skeletons and the rushing Reuss

Death is omnipresent in the triangular paintings of the Chaff Bridge. The motifs symbolize the Dance of Death.

Nobody is safe from death

Painted wooden panels depicting encounters between the living and the dead have been hanging in the roof beams of the Chaff Bridge for around 400 years.

The first pictures were hung on the Chaff Bridge around 1616; the other panels that indicate the year they were created date back to between 1630 and 1637. In this same year, the first publication about the verses on the picture frames appeared. At that time, the cycle was most probably comprised of 71 paintings.

Time and again the paintings, which are exposed to moisture, were renovated. This was the case between 1727 and1730, around 1858 and in 1924/25. Details were changed in the process of renovation, but the content of the paintings remains the same today. By 1743, the verses had become practically illegible. And so the priest Jost Franz Halter received the order to improve them. A number of paintings were lost in 1785 when the Chaff Bridge was shortened.

Kaspar Meglinger...
... can be called the leading master of the Chaff Bridge cycle.

The cycle of creation can also be felt particularly keenly on the Chaff Bridge, where the flow of water rushes by.
Heinz Horat, art historian and author

Beginning with Adam and Eve

The actual Dance of Death cycle begins on the Herrenkeller side with the Dance of the Dead, the fall of man and Adam and Eve’s expulsion from Paradise. In panels 4 to 27, the ecclesiastical and worldly dignitaries alternate in hierarchical order. Panels 28 to 49 represent the professions, from doctor to man of the world. Panels 50 to 57 take up the theme of the ages, from child to old woman. Panels 58 to 63 continue the series of professions. In panel 64, the social ladder ends and the round dance motif returns with the Dance of Fools. Panels 65 to 67 close the cycle with themes of the last days: the passage of time, the resurrection of the dead and the Last Judgment.

In 1632, Kaspar Meglinger, the most famous Lucerne painter of the time, is paid by the authorities for two panels. The last panel was signed by him. For this and stylistic reasons, he can be called the leading master of the cycle, though many fellow painters were definitely also engaged in the project. Kaspar Meglinger used numerous graphic templates for his paintings. The Dance of Death by Hans Holbein the Younger played an important role. Meglinger also integrated very different works, for instance those of the workshop of Sadeler in Munich, into his creation. That he was committed to the then modern style of genre painting can be seen in the numerous scenes of everyday life, which he populated with the portraits of his clients.

The biblical book of “the Preacher” is likely to have been an inspiration for the composition of the program of paintings. The preacher describes people who live in abundance – like many of the people depicted in the paintings on the bridge who, despite the serious theme, radiate joie de vivre, arrogance, pride and self-confidence. The sentence that opens the book, “Höchste Vergänglichkeit, spricht der Prediger, höchste Vergänglichkeit, alles ist vergänglich” (which roughly translates as: “Transience of transiences, says the Preacher; transience of transiences, all is transient”), is the same that closes the book. Transience, vanity and nullity are thereby equated. The cycle of creation can be felt particularly keenly on the Chaff Bridge. The water of the Reuss rushes by.

Death is a companion

The series of paintings could be immediately interpreted by anyone at the time familiar with local affairs as a depiction of Lucerne society. There are, for instance, portrayals of Patrician families. The depicted Death is not likely to have assumed too much importance. The conceited protagonists repress Death too much. Death fits in elegantly with the group depicted – as a companion, not a destroyer.

Listen to the Dance of Death

The audio guide about the Dance of Death takes you over the Chaff Bridge and brings the remarkable paintings of the cycle closer to you.

The audio guide about the Dance of Death, developed by the History Museum of Lucerne, gives you background information on selected paintings from the cycle and their history. Listen to the 20-minute recording to discover more about the Chaff Bridge’s important cycle of paintings. You can click on the audio guide further down this page. Start the audio guide at the History Museum. It takes you from the left bank of the Reuss over the bridge to Mühlenplatz and back again.

Our thanks to the History Museum

We are only able to provide this audio guide with the support of the History Museum of Lucerne. We thank you for your valuable cooperation. 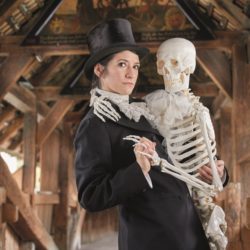