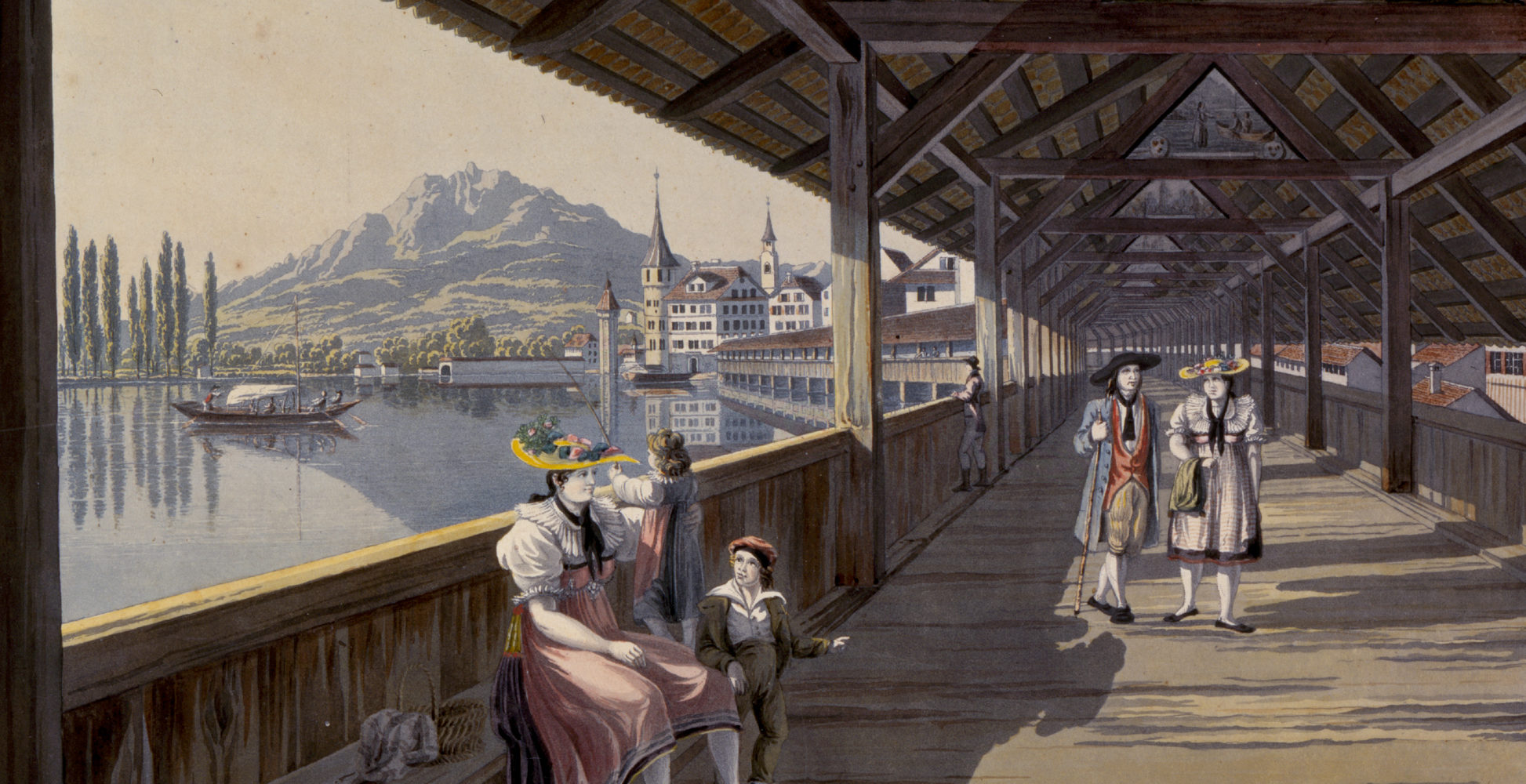 The history of Lucerne’s wooden bridges

Three bridges between construction and destruction

Each of Lucerne’s three wooden bridges has an eventful history behind it. Read about the origin of the bridges and how they have changed with the passage of time.

The lost, the glamorous and the one with two parts

Covered wooden bridges have shaped the cityscape of Lucerne for centuries. Built as footbridges and part of the city’s fortifications, they have continued to change with the passage of time – some of these changes have been deliberate; some have been brought about through catastrophe.

Lucerne in the 12th and 13th centuries: The region was under the control of the monasteries of Murbach and Lucerne as well as the lords of Rothenburg. Lucerne increasingly took on the character of an urban settlement. Following the construction of a stone bridge over the Reuss, which was first mentioned in 1168, the city expanded along the left bank of the Reuss. Its growth was helped by the increase in traffic over the Gotthard Pass around 1200. It was the heyday of urban, bridge and road construction.

It was also a time when power was changing hands. In 1291, the Habsburg king Rudolf I acquired the rights to the city. In 1332, Lucerne joined the Swiss Federation and finally freed itself from Austrian rule at the Battle of Sempach in 1386. Walls and moats were built around the city for protection. And the three wooden bridges also played an important role in the city’s fortifications. 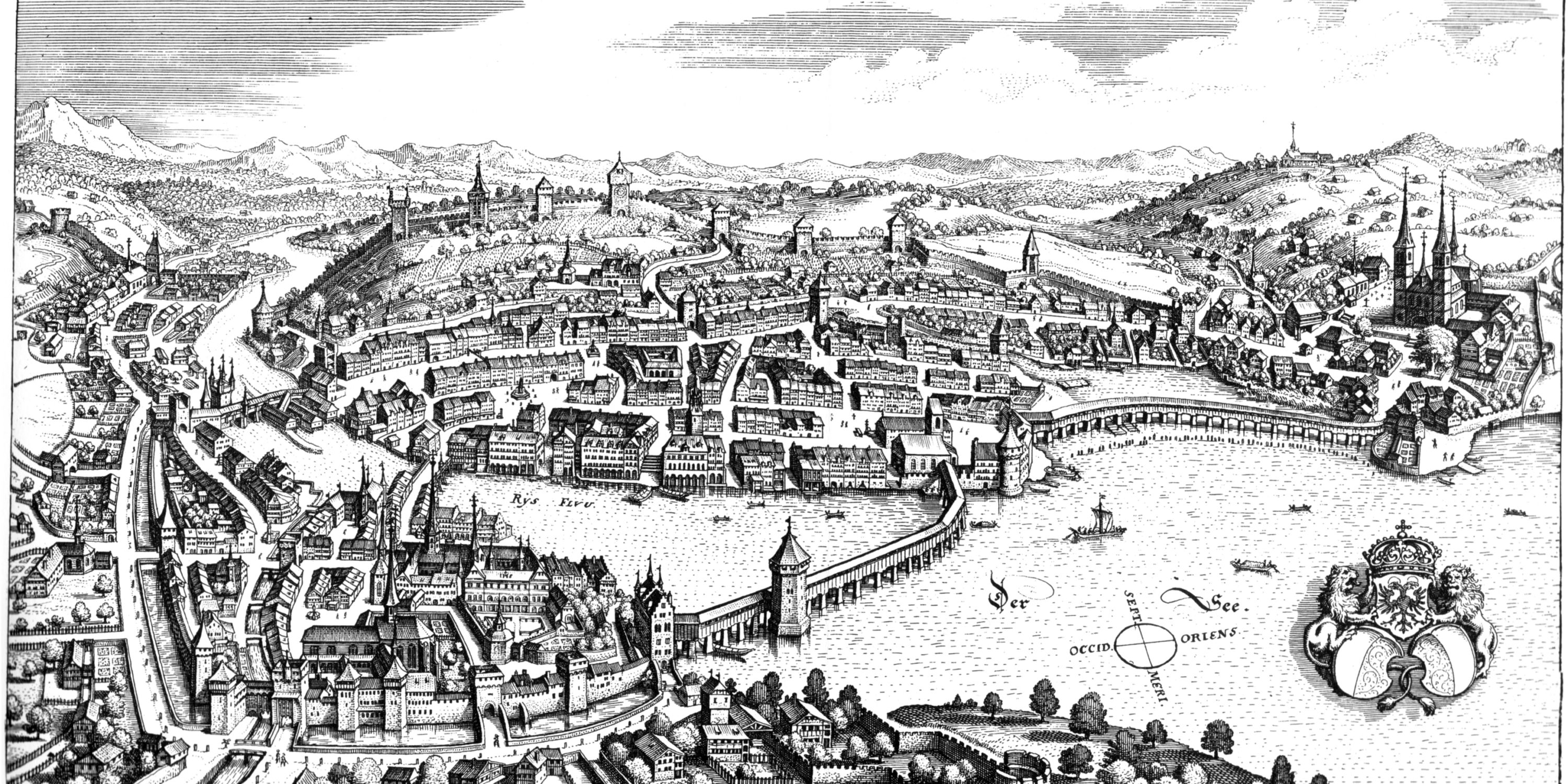 The Court Bridge – the lost one

It was the first of Lucerne’s wooden bridges to be built. The Court Bridge was demolished in the 19th century.

In the 13th century, the city was under threat of attack from the lake. The Court Bridge was built in the bay of Lucerne in order to give better protection to the city. Its route and shape indicate that it was a continuation of the city walls and formed a line of defense from the lake. Rows of piles in the lake just beyond the bridge support this theory.

Connecting the church and the city

The Court Bridge was more than just a part of the city’s fortification ring, however. The 385-meter-long bridge connected the city directly with the monastery church and the parish church (now called the Court Church) in the Hofbezirk (Court District), hence the name “Court Bridge”. It ran over the flat, marshy shoreline of the lake from the Benedictine monastery of St Leger right to the Haus zur Gilgen and the adjacent cemetery. The bridge was mainly used to get to the church and – because of the beautiful view across the lake to the mountains – as a popular walk.

It is not known exactly when the Court Bridge was built. It was definitely constructed after 1252 – circumstantial evidence points to 1265. The first concrete references are from 1310. It is actually mentioned for the first time in 1321 – and is referred to as Kirchweg (Church Way). This makes it Lucerne’s oldest complete wooden bridge. From the middle of the 16th century, a biblical cycle of paintings in the form of unusual triangular paintings was created and mounted in the gables of the bridge. Of the original total of 239 paintings, 226 remain today. They are stored in the City Archives and are not accessible to the public.

A victim of tourism

Today, you will look in vain for the Court Bridge in Lucerne. The advent of tourism heralded its demise. To make more room for hotels and a quay, embankments were built along the shoreline of Lake Lucerne where Schwanenplatz (Swan Square) and Schweizerhofquai (Schweizerhof Quay) are today. And so with parts of it no longer crossing over water, the Court Bridge gradually lost its purpose. It was demolished in four stages: the first 75 meters starting from St. Peterskapelle (St Peter’s Chapel) were pulled down in 1835, another 100 meters were lost in 1839 and again in 1845, and in 1852 the Court Bridge disappeared completely – to applause from the general public.

The Chapel Bridge –
the glamorous one

It is the poster child for tourism in Lucerne. There is one event that has marked the Chapel Bridge more than any other – the catastrophic fire of 1993.

The Chapel Bridge with the Water Tower is undeniably Lucerne’s most prominent landmark. It is a popular subject for photographs and part of everyday life for many locals. Approximately 13,800 people cross it every day to move back and forward between the Old Town and New Town. The Chapel Bridge also had a dual function in the 14th century: it was not just a pedestrian walkway over the Reuss, but also part of the city’s fortifications. This explains its unusual route across the Reuss and higher parapets on the side facing the lake. In combination with the city walls and the Court Bridge, it formed an impressive line of defense.

Named after the chapel

The Chapel Bridge takes its name from St Peter’s Chapel on the right bank of the Reuss. When built, it connected the chapel to the Freienhof, which is no longer in existence, on the left bank of the river. It is not known exactly when the Chapel Bridge was built. An indirect reference was made to it in 1347, though it was actually only mentioned for the first time in 1367. Dendrochronological (tree-ring dating) analysis of cross-beams and corbels indicate that it was built no earlier than 1356. The Water Tower already existed by this time.

Originally, the Chapel Bridge was 279 meters long, but over time it became shorter. Initially, this was because of the construction of an embankment on the left bank of the Reuss. From 1833 onwards, it was shortened several times. The current angled bridgehead dates from 1838. When the Rathausquai (Town Hall Quay) was built on the right bank of the Reuss in 1898, the Chapel Bridge lost another 15 meters. Rumors that the Chapel Bridge could be pulled down following the construction of the Rathaussteg (a footbridge over the Reuss between the Town Hall and the Lucerne Theatre) caused uproar, especially in England. In those days, many English tourists travelled to Lucerne to see the Chapel Bridge and stroll along it. Pulling down this landmark would have deeply upset the English. Both tourists and locals successfully protested against the proposed demolition plans – the Chapel Bridge was saved. Today, it has a length of 205 meters.

Quiz
Test your knowledge about the wooden bridges

The Chapel Bridge’s cycle of paintings has a tragic history. The original 158 triangular paintings, which are mounted in the gables of the bridge, were created from 1614 onwards. They depict scenes from Swiss history and legends surrounding the patron saints of Lucerne, St Leger and St Maurice. When the high waters of 1741 caused parts of the Chapel Bridge to collapse, some paintings were lost to the flood water. However, the greatest loss was caused by the bridge fire of 1993: of the 111 original paintings on the bridge, 86 of them were burned either partially or beyond recognition. 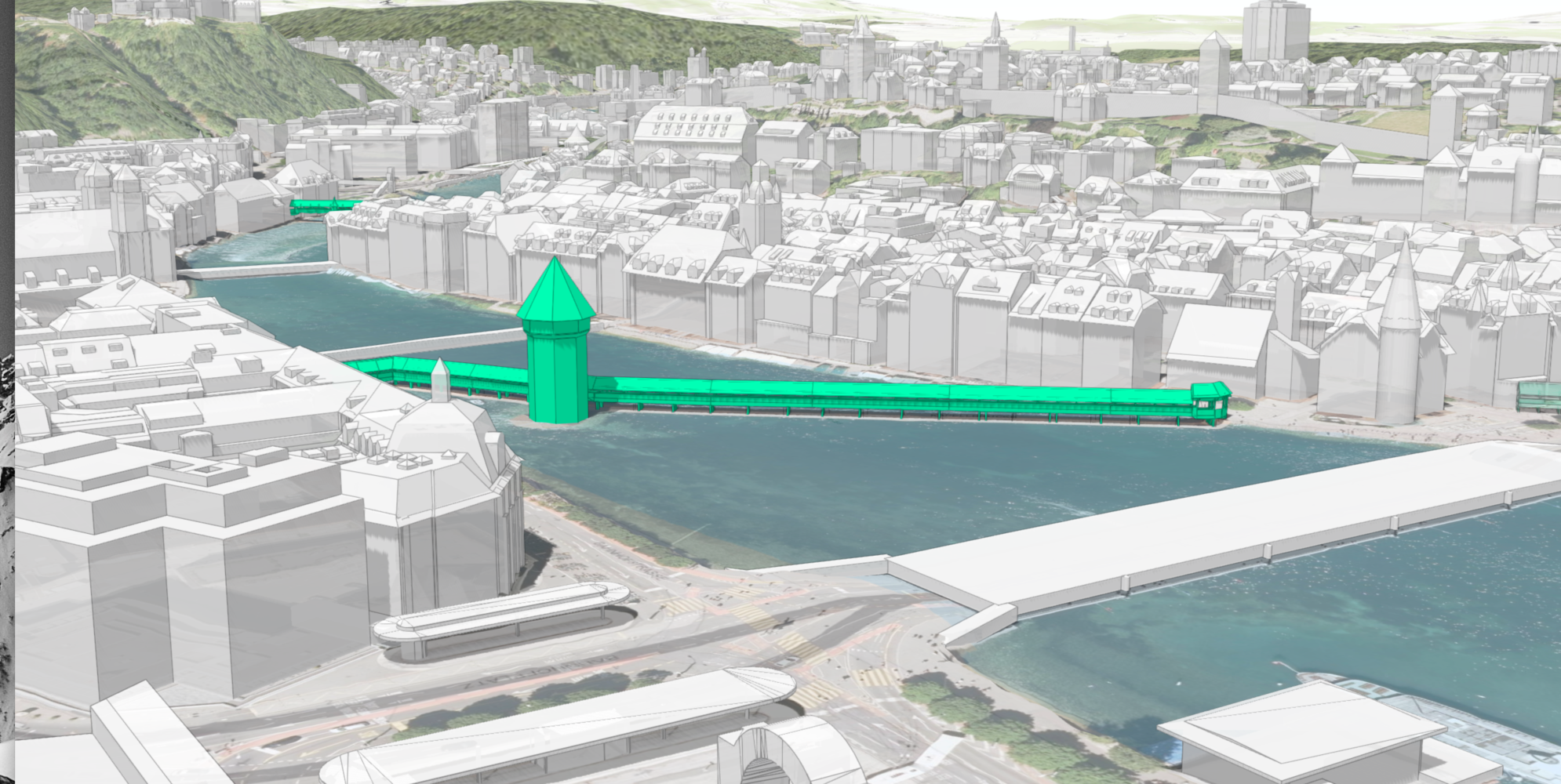 The Chaff Bridge – the one with two parts

It is the “youngest” of Lucerne’s wooden bridges. The Chaff Bridge paintings symbolize the Dance of Death.

The history of the Chaff Bridge is closely tied to the city mills. In the 13th century, the mills were located where Mühlenplatz (Mill Square) is today and on islands in the Reuss. The older part of the bridge on the north side extended roughly halfway across the Reuss in those days and provided access to the mills. The Mühlesteg (Mill Bridge) was built before both the Court Bridge and the Chapel Bridge.

Plans to extend the bridge right across the river were only made at the end of the 14th century as the city grew in size: the Chaff Bridge was completed around the same time as the Museggmauer (Musegg Wall) was built. It was first mentioned as a complete bridge over the Reuss in 1408. And it no longer just served the mills; it also functioned as a battlement.

Chronology of the Chaff Bridge
13th century
The Mühlesteg extends to the middle of the Reuss
1408
It is mentioned as a complete bridge for the first time
1566
High waters cause serious damage to the south part of the bridge
Around 1616 to 1637
Creation of the cycle of paintings
In 1568/69...
... a small wooden oriel with a pointed gable and pennant is constructed on the Chaff Bridge which, a hundred years later, comes to be used as a chapel.

Named after a by-product

The mills are responsible for the name “Chaff Bridge”. Chaff is a by-product of milling. The Chaff Bridge is so named because workers would often dispose of the chaff by dumping it from bridge into the Reuss. While the northern half of the Chaff Bridge continually evolved as the mills were rebuilt or altered, the southern half, which was built later, remained practically unchanged. Originally 112 meters long, only 81 meters remain today. It can still be clearly seen today that the Chaff Bridge comprises two distinct parts.

Briefly called the “Bridge of Death”

The Chaff Bridge’s cycle of paintings symbolizes the Dance of Death and was created between 1616 and 1637. The original cycle probably comprised 71 triangular paintings They depict encounters between the living and the dead. A number of paintings had to be removed when the Chaff Bridge was straightened and shortened on the Mühlenplatz side in 1780 and 1785. Today, there are 45 gable paintings to see on the bridge. In the 19th century, the bridge was also called the “Bridge of Death” after the paintings in which Death is omnipresent. But the name never gained currency. 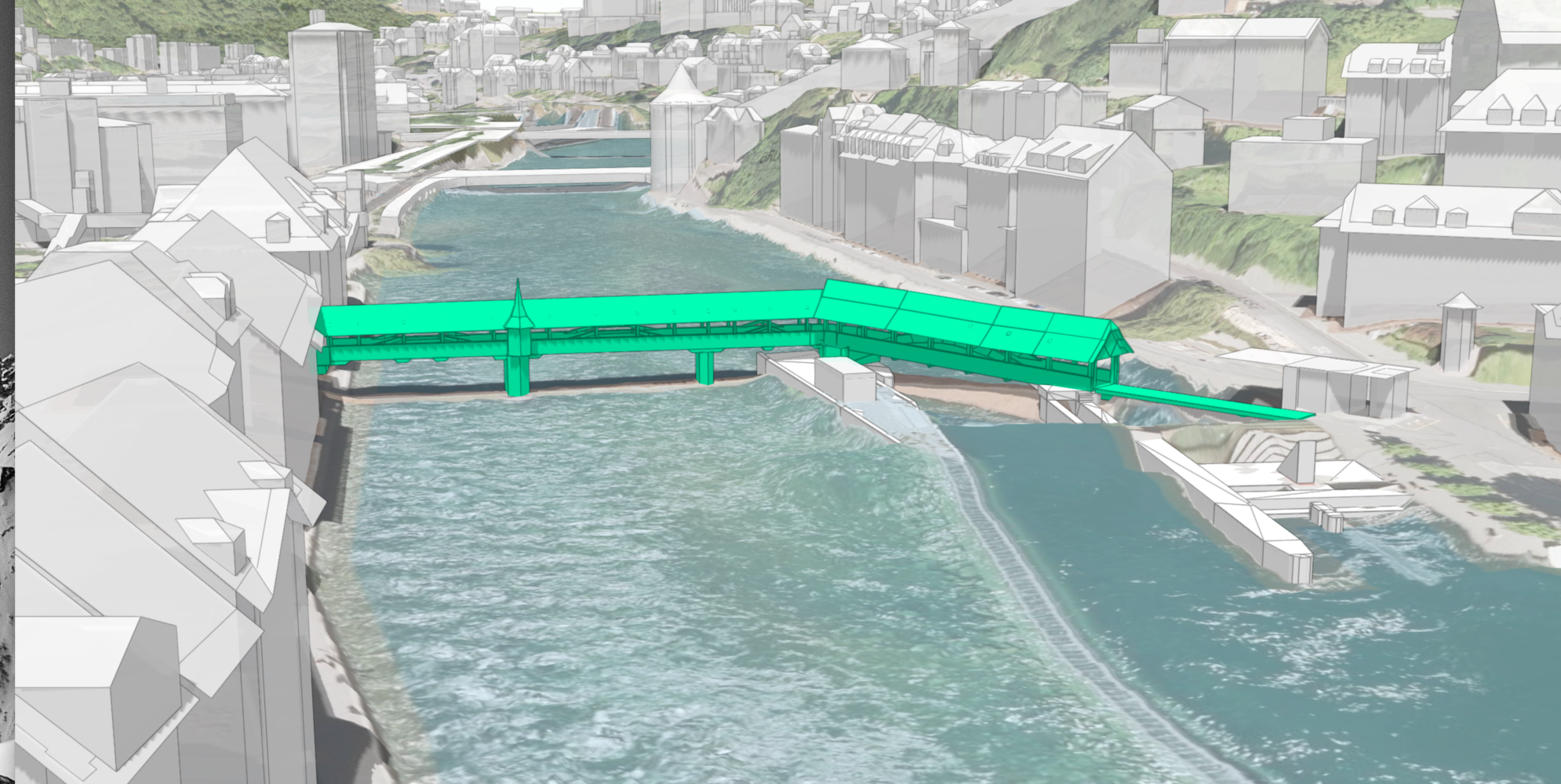 Chapel on the bridge

A special feature of the Chaff Bridge is the chapel on its southern half. An oriel-like wooden structure with a pointed gable and pennant has adorned the bridge since 1568/69. Originally used as a shelter against the elements and featuring a depiction of a saint, it eventually came to be used as a chapel. The structure is mentioned as a chapel for the first time in 1669 and carries the name “Maria auf der Reuss”. Over time it gained additional features: a neo-Renaissance front in 1890, which remains unchanged today, and on either side stained-glass window depictions of Saint Maurice and Saint Catherine in 1905.

The Chaff Bridge ranks behind the Chapel Bridge in terms of tourist appeal. But it also has its enthusiasts: when English artist Mary Hemsworth (1869–1940) returned to Yorkshire after visiting Lucerne, she had a full-scale replica made of the Chaff Bridge for the grounds of her estate.

Today, the Chaff Bridge is a popular footbridge. Approximately 8,400 people cross the Reuss between Mühlenplatz and the History Museum every day.