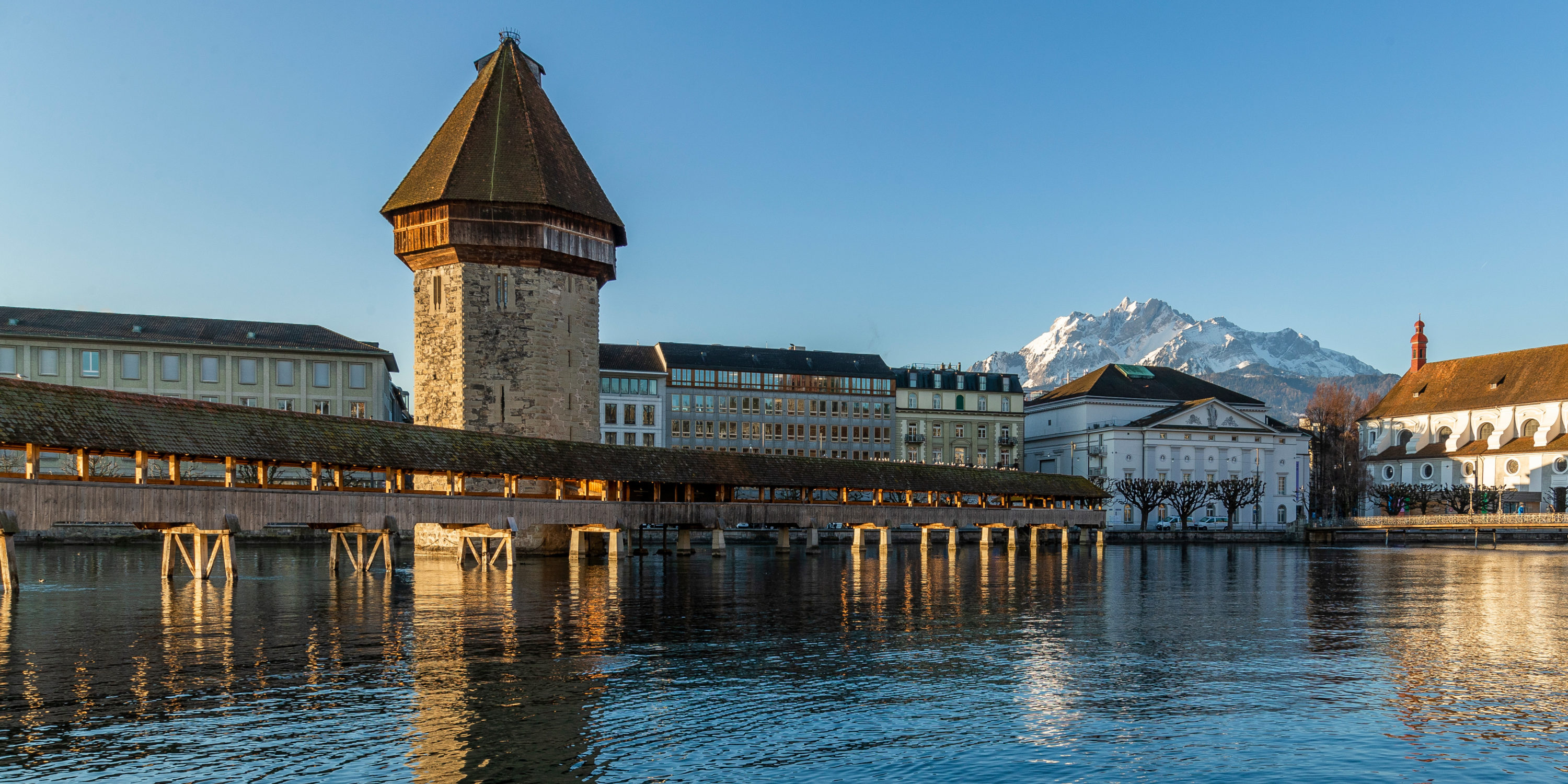 The Water Tower is a special monument

The imposing Water Tower existed before the Chapel Bridge was built. Its history and what went on within its walls are very intriguing.

The stone brother of the Chapel Bridge

Lucerne’s Water Tower was built in the 13th century – almost a hundred years before the adjoining Chapel Bridge was constructed. It is a massive structure.

It is hard to imagine the one without the other – the Chapel Bridge and the Water Tower. In fact, the Water Tower is probably almost a hundred years older than the wooden bridge. The Water Tower was already standing when the Chapel Bridge was constructed in the middle of the 14th century. It was probably built soon after 1262 under the rule of Berthold von Steinbrunn, the then abbot of the Alsatian monastery of Murbach and lord of Lucerne. The abbot demonstrated his power to the insubordinate people of Lucerne by building the large, unusually shaped massive structure directly in the middle of the Reuss. This hypothesis – for there are no documented sources or archeological facts about the building of the Water Tower – is promulgated by Heinz Horat, Lucerne art historian and author.

Berthold von Steinbrunn was an ambitious, power-conscious warlord and known as a builder of castles and city fortifications. In Alsace, for example, there are also several city castles with an octagonal floor plan – just like the Water Tower – the closest relatives, as it were, of the Lucerne landmark. This is just one of several pieces of circumstantial evidence that would suggest the abbot of Murbach, Berthold von Steinbrunn, was the builder of the Water Tower. The mighty fortified tower set plumb in the middle of the river was a sign of power. It is unlikely that it was used as a defensive tower and as such was not part of the city’s fortifications.

The first exact dates known are from the 14th century: dendrochronological (tree-ring dating) measurements of the wooden beams in the clerestory and in the roof truss put the date at 1339. The roof of the tower is probably much younger than the stone-built tower shaft. The structure in the Reuss was documented for the first time in 1367. The name “Water Tower” first surfaced in 1397.

The construction and dimensions of the Water Tower contribute greatly to its imposing and unique appearance. An extremely unusual feature is its octagonal ground plan. The stone-built shaft of the tower has vertical walls about 20 meters in height, a circumference of about 39 meters and a diameter of over 11 meters. The walls are up to three meters thick, gradually tapering upwards. At the side of the entrance to the tower, a spiral staircase leads up to the wooden clerestory. Together with the octagonal pyramid roof, it completes the Water Tower, which in its full splendor is about 35 meters high.

Imprisoned in the dark

The Water Tower has four floors on the inside. The dungeon in the basement served as a prison for many years.

Down in the basement of the Water Tower is the darkest of all rooms – the dungeon, which has no doors or windows. Until the 18th century, the bottom floor was used as a prison. The only way it could be accessed was through a hole in the floor of the treasury above it. No light can get into the dungeon when this hole is closed. The prisoners were kept in complete darkness and had no chance of escaping. The dungeon is 5.5 meters high and has no stairs or other similar means of access. Prisoners had to sit on a toggle and be lowered into the dungeon on the end of a rope.

Torture in the treasury

Located directly above the dungeon is the treasury. It was used first as a prison and a place of interrogation and torture. Only two small embrasures let some daylight in. The state treasury was only moved to the treasury room in 1759. Before that it was stored in the tower room above. It has windows all around, making it the brightest room in the Water Tower. The vaulting of the tower room was carried out at a later date, as it was in the treasury and dungeon, too. A narrow secret chamber was created between the vaulting and the floor of the tower room, which, when it was rediscovered in the 20th century, was however empty.

On top of the stone-built tower shaft is the wooden clerestory and the pyramid-shaped roof of the Water Tower. The clerestory protrudes around a meter over the masonry on all sides. Initially, it was used as an open defensive platform before being turned into a closed clerestory, probably in the 15th century. Each of the eight sides has two square window openings with shutters. At the end of the 15th century, the clerestory was fitted with a winch with a swing arm so that goods could be transported up directly from boats. The clerestory is 3.3 meters high and completely open at the top. A look up to the roof truss reveals the dimensions of the octagonal pyramid roof, which has a height of almost 12 meters.

76...
... is the number of steps on the spiral staircase from the entrance on the Chapel Bridge up to the clerestory

The Water Tower has served various functions in its roughly 700-year history. Today, it has a tradition-steeped association as tenant.

Untold dramas have unfolded within the Water Tower’s walls over the passage of time. Besides being an observation post, it was a prison for hundreds of years. Between 1397 and 1803, the different rooms in the Water Tower – and particularly the dungeon – served as a prison and place of interrogation and torture. It seems strange that the same structure was also used to house the state treasury. A spectacular theft occurred in the middle of the 18th century.

Stole from the state for 10 years

The setting is the tower room: in 1758, it came to light that two state officials had been helping themselves to Lucerne’s state treasury for 10 years. Together with their accomplices, they had stolen over 50,000 gulden. They gained access to the tower room through a hole in the ceiling, replacing the coins that they stole from the sacks with stones and sand. This is why the theft was not noticed for many years. In 1798, the treasury was moved in part to the Helvetian state chamber and in part to the cantonal administrative chamber. The tower room was also used as a prison during the time of the Helvetic Republic (1798 to 1803). After that, more peaceful times returned to the Water Tower. The Water Tower also served another purpose: it was first mentioned as an archive as early as 1401. The Lucerne City Archives were located in the tower room until 1919.

The Water Tower has been home to many animal guests. Early on, storks built their nests atop the Water Tower. The nest, however, has been abandoned since the end of the 1880s. Today, the spectacular flight of the Alpine and common swift can be observed around the Water Tower. These acrobats of the air arrive at their summer quarters in Lucerne in the springtime. They nest in the clerestory and raise their young in the Water Tower.

One prisoner...
... paid for his attempt to escape from the tower room with his life. He jumped out of the window into the shallow Reuss and hit the river bed.

The tower survives the fire

That the Alpine and common swift can still live in the Water Tower is all thanks to its solid construction. It survived the Chapel Bridge fire of 1993. Individual bricks shattered under the impact of the enormous heat; the clerestory and the wooden roof, on the other hand, escaped the fire largely unscathed – thanks also to the courageous intervention of the fire brigade.

This was, of course, fortunate for the Lucerne Artillery Association, which has been a tenant in the Water Tower since 1937. The association keeps an extensive display of weaponry in the treasury (now called the armory). Its members hold meetings in the tower room (now called the artillery room). 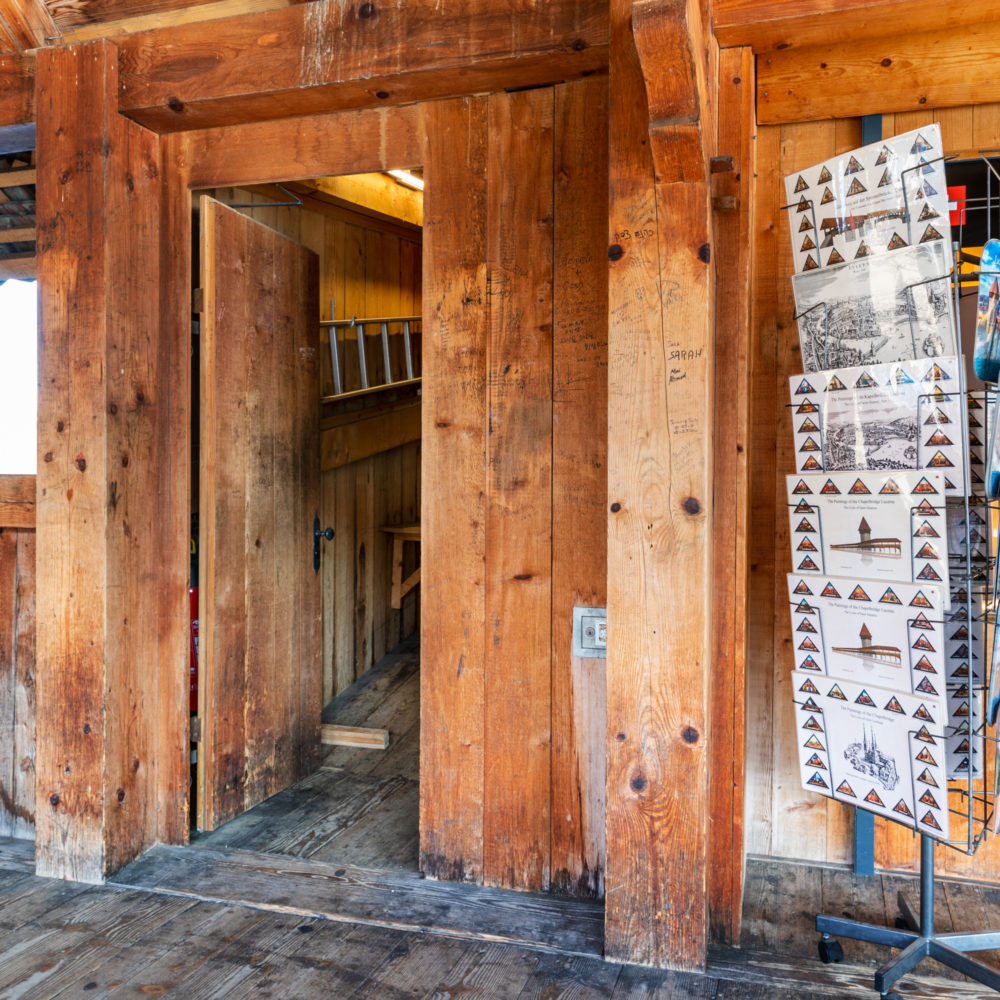 Step inside – here it is possible

360° panorama of the Water Tower 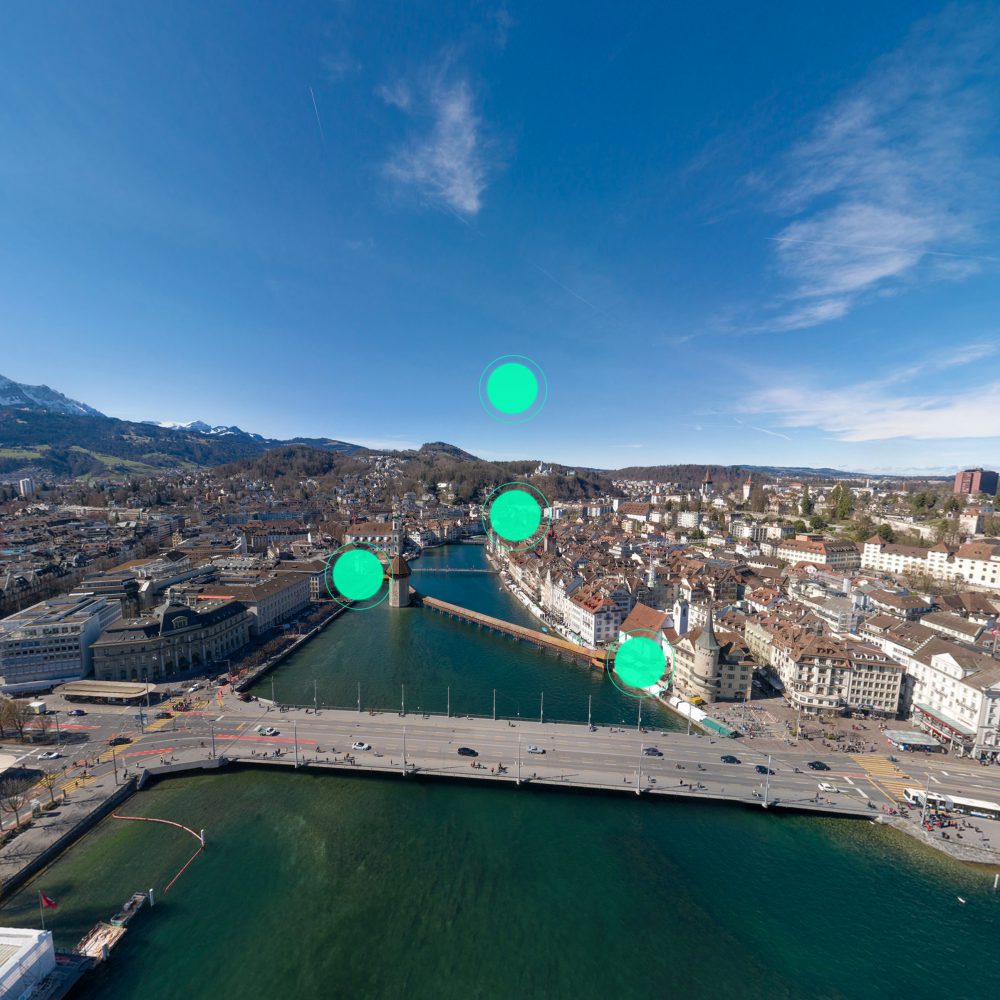 Guided tours by the Artillery Association

Anyone who would like to experience the Water Tower from the inside must contact the Lucerne Artillery Association. The association offers guided tours and rents out its rooms for events. The Water Tower is not accessible to the public. The beautiful view of the Water Tower and Chapel Bridge from the outside more than makes up for this. The pair is one of the most photographed landmarks in Switzerland for good reason.