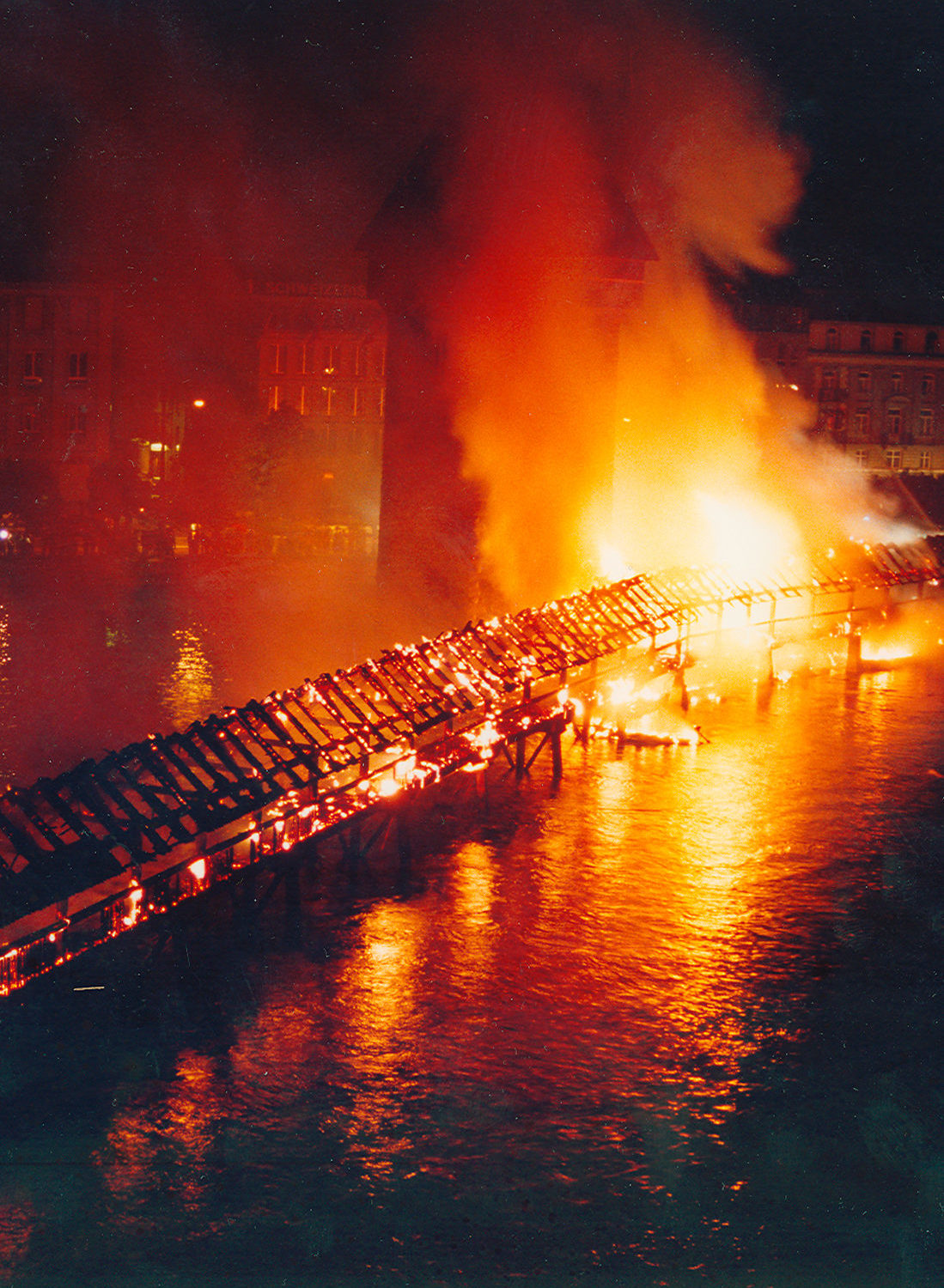 A landmark is on fire

A large part of the Chapel Bridge was destroyed by fire in 1993. The cause was likely to have been a carelessly discarded cigarette. The damage was immense.

Lucerne mourns the loss
of its landmark

The Chapel Bridge caught fire on 18 August 1993. The devastating fire triggered reactions from around the world. Dozens of the unique triangular paintings were destroyed.

Older Lucerners still remember the night of 17 August to 18 August 1993 very well. A fire that spread very rapidly destroyed around two thirds of the 205-meter-long Chapel Bridge. A large part of the roof and supporting beams were incinerated. The exact cause of the fire remains unknown to this day. It is assumed that a carelessly discarded cigarette set a boat that was moored under the bridge on fire. The fire spread to the underside of the bridge and then to the roof beams of the Chapel Bridge.

The Lucerne fire brigade faced a huge challenge. The operation was extremely difficult because of the sheer length of the Chapel Bridge. The fire spread very rapidly through the roof beams. Spiders’ webs in the gables helped the fire spread explosively. The heat built up in the dense mesh of the webs and gases accumulated, igniting spontaneously. Half the bridge was completely on fire within 10 minutes. Fortunately, the fire was soon contained and prevented from spreading any further. The two bridgeheads and the supporting structure were saved. Today, the traces and sections damaged by fire are marked on the Chapel Bridge.

The first few minutes of the devastating fire
0.50 a.m.
A local resident reports the fire to the fire brigade
0.51 a.m.
Two fire brigade teams of 50 people are deployed
0.53 a.m.
A 10-meter length of the Chapel Bridge is already on fire
0.54 a.m.
The duty officer requests 100 more firefighters

Flames were shooting up and threatening to spread to the wooden superstructure of the Water Tower. A big problem was the souvenir shop immediately next to the tower. The flames were particularly fierce in this area because of the large quantities of plastic bags and plastics in the shop. The fire could not be put out from the bridge itself because the floor had burned through. For that reason, the fire brigade prevented the fire from spreading to the Water Tower by deploying a number of water cannons from Bahnhofstrasse. However, due to the temperature sensitivity of the sandstone, the surface of the Water Tower was badly damaged. The sandstone exploded under the immense heat, tearing up to 20-cm-deep holes in the walls.

Historical triangular paintings are destroyed in the fire

The full extent of the damage became apparent as day broke: around two thirds of the Chapel Bridge had been destroyed. Of the 111 triangular paintings on the bridge at the time of the fire, 86 of them were burned either partially or beyond recognition. Lucerne City Council (Stadtrat), i.e. the executive government of the city of Lucerne, took immediate action. Already on the day of the fire it decided that the Chapel Bridge – Lucerne’s most prominent landmark – should be rebuilt. One of the reasons for this decision was that the bridge had been continually renovated and changed over the years, and was no longer in its original state anyway. The burned wood had mostly come from the period between the 17th and 20th centuries. In the process of reconstructing the bridge, the Water Tower was also completely renovated.

Dramatic scenes from the night of the fire: the Chapel Bridge is alight.

The Chapel Bridge fire came as a great shock to the local population. Thousands of people gathered on the banks of the Reuss, on the Seebrücke (Lake Bridge) and on the Rathaussteg (Town Hall Footbridge) to witness the impossible with their own eyes. They looked on in horror, disbelief and sadness, many with tears in their eyes. The reactions, which the local newspaper, the LNN, printed in a special dedicated issue, revealed the pain the people felt: “You can see just by looking at the people what this loss means to them. Many were in tears.” And: “It’s such a sad sight to see. It pains me greatly.” And: “It’s like a death in the family – and a real catastrophe for Lucerne.”

Headlines around the world

The fire quickly turned into a media event. Journalists from all corners of the globe descended on Lucerne. The LNN distributed a special dedicated issue within hours of the fire. Interest in the story extended beyond the Swiss border: media around the world reported on the destruction of Lucerne’s most prominent landmark. France Inter, radio stations from Dubai, Hong Kong and Johannesburg, as well as ABC from New York called, to name just a few. It was such a dramatic event that it made the front pages of national and international newspapers and magazines. The Swiss tabloid Blick ran the headline “Lucerne is weeping!” On the other side of the planet, a popular Japanese daily carried a picture of the burning bridge with the headline “A piece of Swiss history in flames.”

Special issues from local Lucerne newspapers on the fire

The busy Director of Tourism

Kurt H. Illi (✟ 2010) was the Director of Tourism for the city of Lucerne between 1978 and 2000 and drummed up business for “his” city around the globe. He was the public face and a busy and controversial marketer of Lucerne. When the Chapel Bridge almost burned down in 1993, he posed beneath the charred roof beams and broadcast his pain to the world.

A piece of Swiss history in flames
Japanese newspaper

Did a cigarette cause the fire?

The exact cause of the fire remains unknown to this day. The investigation was terminated on 20 July 1994 due to a lack of evidence. A carelessly discarded cigarette is considered the most likely cause. It set a boat beneath the Chapel Bridge on fire, triggering a chain reaction. Even if it were possible to trace the perpetrator, they would not be prosecuted. Crimes such as arson, the contingent, intentional or negligent causing of a conflagration, have a statute of limitations of 15 years.

An investigation into the history of the bridge’s construction began the day after the fire. Since the planning documents that still remained were not detailed enough to be able to reconstruct the bridge, researchers spent around two months photographing, listing, drawing and describing every element of the bridge. Each beam was inventoried. Construction approval was given in the middle of November 1993. Elements that were damaged and could not be repaired were removed, and intact tiles were salvaged for reuse. A small topping-out ceremony following an old carpenters’ tradition was held on 10 February 1994. Two months later on 11 April 1994 the construction work, which cost CHF 3.4 million, was already completed.

The re-opening of the Chapel Bridge on 14 April 1994 was accompanied by much celebration. Around 200 journalists from around the world attended the celebrations, and Swiss television broadcast live from Lucerne. Another unforgettable image is the then Director of Tourism for Lucerne Kurt H. Illi being overcome with emotion at the re-opening of the Chapel Bridge. He was so moved to see Lucerne’s most prominent landmark restored to its former glory that he broke out in tears in front of the running cameras. This time it was tears of joy that were broadcast around the world and made the Chapel Bridge even more famous.

Work is immediately started on the reconstruction of the Chapel Bridge.

The highest level of fire protection

Particular attention was paid to fire protection when reconstructing the bridge. The measures provided the highest level of fire safety on the bridge. Today, smoking on the Chapel Bridge is strictly prohibited. More frequent cleaning reduces the risk of heat accumulation through spider’s webs. Smoke detection systems, heat cables and lightning protection provide additional safety. In addition, the police use video cameras to monitor every section of the bridge. Another measure that is barely noticeable with the naked eye is the use of fire-resistant glass between the triangular paintings: two paintings are always separated by one sheet of glass. This is to prevent the rising heat and fire from spreading under the roof in the event of a fire.