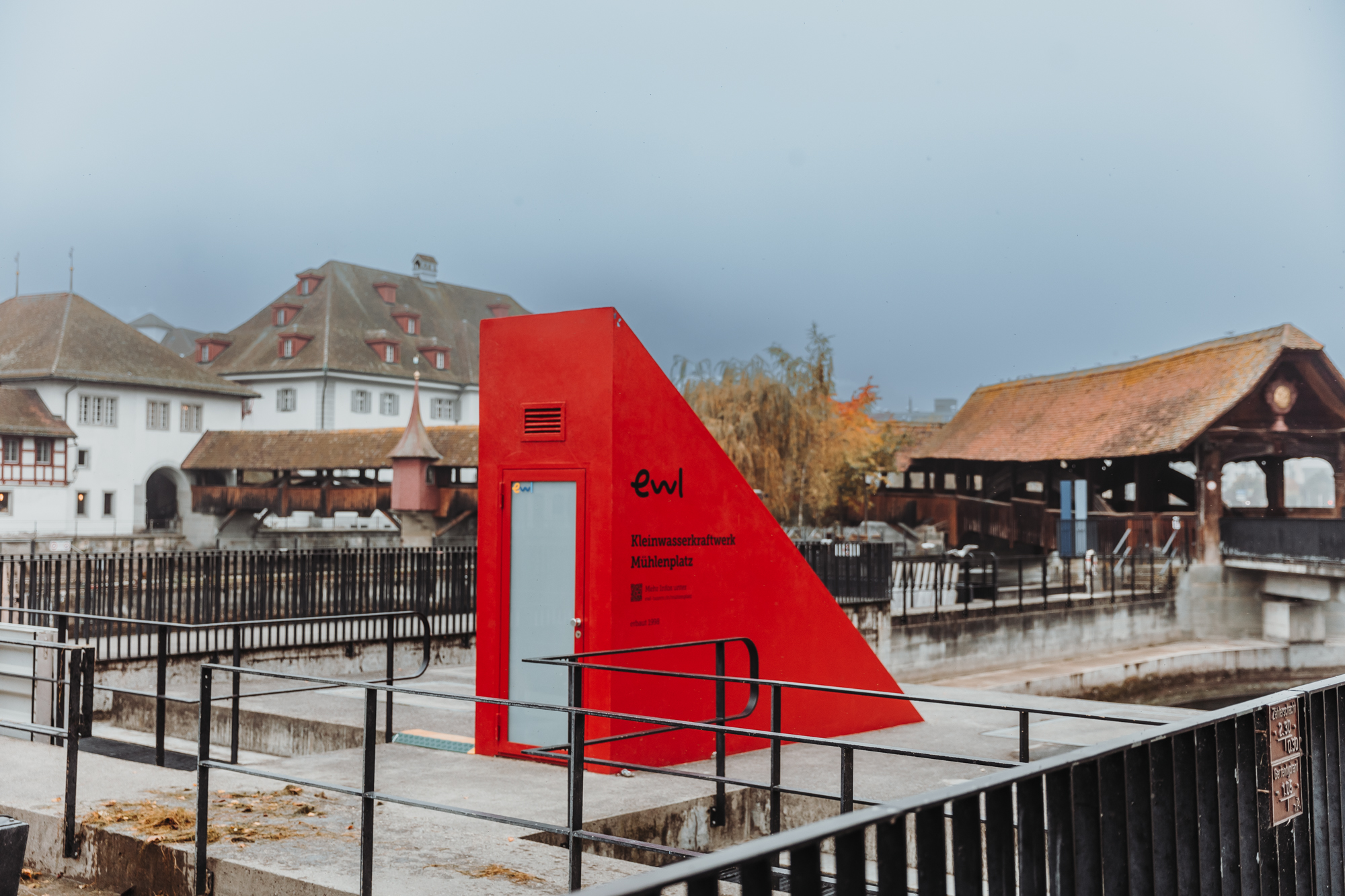 Modern technology based on an ancient principle

At Mühlenplatz (Mill Square) in the heart of the city of Lucerne, the flowing power of the Reuss has been harnessed for energy generation for centuries.

The speed at which the Reuss flows at the level of Mühlenplatz has always been high, providing ideal conditions for the generation of energy.

Along with Zurich, Geneva and Thun, Lucerne is one of few cities in Switzerland that lie on a lake outlet. The volume of water and the artificial gradient between the headwater (inlet) and tailwater (outlet) generate higher pressure on entering the turbine that can be profitably converted into energy.

The first mills on the Reuss were constructed in 1178 where Mühlenplatz now stands, due to its perfect location directly on the river. Thanks to its proximity to the Chaff Bridge, the site served as a milling and reloading area. At that time it was on the outskirts of the city and was well protected by its fortifications.

Over the next few centuries, it underwent numerous extensions and conversions. Artificially created islands, channels and a total of eleven water wheels were used to operate grain, grind and stamp mills as well as the city’s mint. Wooden gears were used to transmit the power and it is estimated that they produced around 20 to 25 kilowatts of power.

The birth of the modern turbine power plant

When the city mills burned down in 1875, all but the grain and spice mills were destroyed. This led in 1887 to 1889 to the Korporationsgemeinde (corporation community) constructing the first turbine power plant together with the associated commercial building.

An electricity generator installed in 1926 enabled the operators to convert the mechanical energy generated into electrical power. A cogwheel drive transmitted the hydropower generated via various gears into the commercial building. The electricity produced was used, among other things, to power the city’s trams.

1977
Damage shuts down the power plant
1995
Electorate approves new power plant project
1998
Mühlenplatz small hydroelectric power plant is put into operation
A centuries-old tradition
As far back as the 8th century, the monastery belonging to the Hofkirche (Court Church) harnessed the water power of the Reuss.

Irreparable damage forced the power plant to be shut down in 1977. It was recommissioned in 1998.

The new Mühlenplatz small hydroelectric power plant, which was approved by a large majority of Lucerne’s electorate, was put into operation by the city’s municipal works department on 4 April 1998. Adapted to the contemporary technological possibilities, the modern technology used today continues to follow the same ancient principle as the very first mills on the Reuss.

Run-of-river power plants like the Mühlenplatz small hydroelectric power plant are located on rivers. The output of the power plant depends crucially on the volume of water and the gradient between the headwater (inlet) and the tailwater (outlet). The artificial gradient is ensured by the needle weir. During operation, up to 58 cubic metres of water per second are directed on to two Kaplan turbines – for comparison: a large bath holds just under one cubic metre of water.

Both turbines consist of a movable guide vane with 16 blades and a turbine wheel with three blades. Inside the turbines, a generator is driven that converts the mechanical energy into electrical energy. The two machine groups have an output of 680 kilowatts and produce around three million kilowatt-hours of electricity every year. In this way, some 700 to 1,000 households are supplied today with 100 percent ecological electricity from renewable sources.

The electricity generated by the Mühlenplatz small hydroelectric power plant bears the “naturemade star” quality seal. The label stands for energy from renewable and ecological sources. It is sponsored by the Association for Environmentally Sound Energy (VUE), which was established in 1999.

Sustainable electricity for generations to come

In 1995, the Canton of Lucerne granted the operator of the Mühlenplatz small hydroelectric power plant the concession to operate for another 80 years. Subsidies and cost-covering remuneration for feed-in (CRF) enable the production of higher quality energy. Though more costly to produce, it achieves a higher sales price when marketed.

The federal government’s support and promotion ensures ecological electricity production from renewable sources that is sustainable and, in the long term, also serves future generations.

The promotion of renewable energies and the protection of animals and the environment are both an aspiration and a motivation for us.
René Buob, Head of Grid and Power Plant Management at ewl energie wasser luzern

Overhaul work on the turbines is carried out according to the manufacturer’s specifications. The turbines have to be overhauled after 100,000 operating hours, which is roughly equivalent to 11.5 years of continuous operation. Electronic and mechanical equipment is gradually updated as part of a multi-year overhaul plan in order to ensure the continued safety and reliability of the plant.

Aquatic plants have proliferated in recent years. This can be traced back to more hours of sunshine and the consequent warming up of the water, especially around the bay of Lucerne. In late summer, thick carpets of seagrass measuring several metres in diameter are washed up from Lake Lucerne and clog up the upstream trash racks. When these are no longer working at the required throughput, the machine groups switch off automatically. A horticultural company removes several hundred kilos of seagrass every single day in autumn.

An odd collection of floating debris

The Mühlenplatz small hydroelectric power plant is something of a passion for Ludwig Hafner, inspection and maintenance specialist at ewl. He and his colleagues are dedicated to taking good care of the facility day in, day out. Ensuring its reliable and efficient operation is important to him.

Naturally this means that every now and again he has to clear floating debris and rubbish as well as dead fish and ducks from the trash racks. Some pretty strange objects can get caught in the trash racks, especially during Fasnacht (carnival): “Once, we had to remove a portable toilet. We’ve even fished tables and benches and bales of hay out of the water.” With a smile on his face and an oil can in his hand, he disappears back into the fire-red machine room.

Less is more
Who would have thought it?
A large volume of water has a negative effect on electricity production at the Mühlenplatz small hydroelectric power plant.

Conditions are better in winter

Once the height differential is less than 60 to 80 centimetres, the plant shuts down. Following consultation with the municipal carpentry and joinery department, operation can be switched to sail mode. The plant stops producing electricity.

The small hydroelectric power plant and the Reusswehr (Reuss Weir) are insurmountable obstacles for many aquatic animals. The fish ladder and the beaver ramp allow the animals to continue their natural migration.

“A hydroelectric power plant must comply with numerous legal requirements. For example, we are obliged to ensure fish passage,” says René Buob, Head of Grid and Power Plant Management at ewl.

The fish pass ensures ecological connectivity between the Reuss and Lake Lucerne. There are species of fish that need both flowing and standing water environments during their life cycle. Weirs and turbines interrupt the migration of these fish between the Reuss and the lake. The fish pass enables the fish to get past this technical obstacle. A reinforced “fish window” was installed in the power plant through which the migrating fish can be observed in the fish pass.

Lake trout leave Lake Lucerne in the autumn to breed in the Reuss during the months of November and December. They deposit their spawn in gravel beds and return to the lake after the eggs are laid. The young lake trout remain in the Reuss for one to two years before moving upstream to the lake. Three years later they return to the Reuss as mature adults, ready to reproduce. And so the circle of life closes.

The city’s Energie-Tatorte-Trails (Lucerne energy trail) starts at the Mühlenplatz small hydroelectric power plant. Can you solve all the clues?

A walkway for beavers

There are around 3,500 beavers in Switzerland, some 75 of which are at home in the canton of Lucerne. Here the beaver territories are predominantly along the Reuss and its tributaries. The creatures often swim upstream in their search for a suitable habitat. The Mühlenplatz small hydroelectric power plant presents an impassable obstacle for them on their migration journey. It forces the rodents to take a longer, perilous route over land.

In response to this problem, Pro Natura and the Canton of Lucerne’s Department of Agriculture and Forestry set up the “Beaver Ramp” project. A wooden up-and-down ramp positioned in the middle of the small hydroelectric power plant enables these protected wild animals to migrate both upstream and downstream safely. A camera trap with motion sensor has been installed to document the beavers’ movements.